The history of the RIVO review

The network members have built over the years and expertise in working with individuals who have experienced this kind of trauma develops. As the network grows and the knowledge is refined, RIVO is established in the network of the intervention with immigrant people as a body indispensable. The number of people referred to the RIVO increases with the time and RIVO offers its services to people from all around the world. This is John Docherty, always co-ordinator to this day, that will guide RIVO through its evolution.

In 2010, RIVO knows its greatest year, with nearly 700 cases of persons in the therapeutic follow-up. But in 2012, RIVO falls into a crisis due to cuts in federal 2012 in health care to refugees and asylum seekers (IFHP). The body loses 80% of its revenue sources in the space of a month. An anonymous donor saves the RIVO by making a donation to pay $ 30,000, and $ 50,000 in the following years. This donor remains until today a major source of support.

The story of Abdul

After having gone through a few lean years, and with a high level of commitment on the part of John Docherty, co-ordinator, and its members, RIVO will regain its vitality. In the research of various sources of funding, RIVO began its first-ever fund-raising campaign. RIVO is its ambassador : a young refugee, Abdul Aziz Kimba Djado, which agrees to run for the cause by wearing the bib of the RIVO : "Réhumaniser the world". This is the first marathon of his life. He ranked 6th on the all the runners and first in his age category.

Abdul attracts the attention of the media. Over the interviews, the story of the athlete goes to "the one who ran for his life," to " he who runs to the life. "Follow this story inspiring, through an interview on the television show Medium-large, Radio-Canada with Catherine Perrin where is interviewed Abdul, in the company of Véronique Harvey, Ts, psychotherapist and member of the RIVO.

Move of the offices of the RIVO

In August 2015, the RIVO moved its warm and sunny offices in the building of the body the Household, an NPO that provides employment services and francization... And therefore, complementary services allowing immigrants in need of psychological support to find on the spot.

2015, the reception of syrian refugees

The announcement of the significant arrival of Syrian raises a wave of sympathy and a wave of love for the RIVO. In December, the RIVO is an open evening, where more than 40 people from various organizations come celebrate the official opening of its new space. The fact that the media reveal the images of Syrians fleeing massively by boat, creates a turning point for the RIVO who receives this evening, "a wave of love" on the part of visitors sympathetic to the cause of refugees. One of them is called Marie-Brodeur Gélinas; it has announced that it will provide the profits of the sales of its macarons " welcome the refugees " the RIVO. 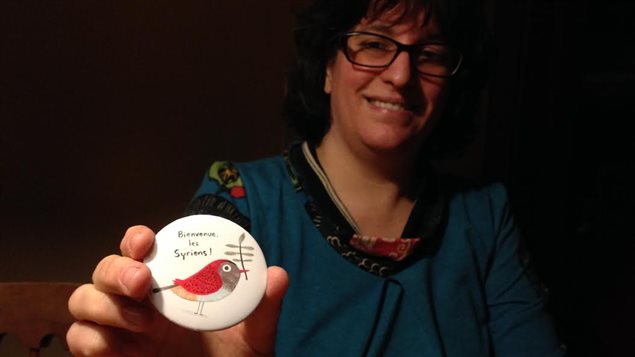 The wind in the sails!

RIVO is undergoing a renaissance, and add "Resilience" to its identity, thus becoming RIVO-Resilience. The parallel between the resilience of the organization, its ability to survive and rebuild, with one of the survivors, is striking. In 2015, Amnesty international acknowledges the work of the RIVO offering the " Price Benenson-Humphrey ", with 2000 $, which comes to the aid of each year, a victim of the violation of fundamental rights or to an organization that defends the fundamental rights.

Video testimony of a survivor of torture, which speaks of the help he has received in the RIVO

The gratitude to the RIVO continues, but this time it is the High Commissioner of United Nations for refugees (UNHCR), which publishes an interview on a follow-up to the RIVO with a boy of 5 years old.

RIVO shares his expertise through training

In order to equip the participants from various community and in institutional settings, RIVO sharing his expertise through training for years. On April 4, 2016, Gilles de Margerie, MD, and Véronique Harvey, Msc. Psychotherapist, both members of the RIVO, make a presentation to the Symposium on global health on the response to trauma among refugees in front of hundreds of students of medicine of McGill University.

For the past 2 years, RIVO showcases the work of clinicians by publishing on its blog writings on various topics related to the organized violence:

In this capsule video, Anousheh Machouf, Psychologist and co-founder of the RIVO, speaks of his work with people who have suffered violence

Awareness through the celebration of the resilience

The announcement of the significant arrival of Syrian raises a wave of sympathy and a wave of love for the RIVO. In December, the RIVO is an open evening, where more than 40 people from various organizations come celebrate the official opening of its new space. The fact that the media reveal the images of Syrians fleeing massively by boat, creates a turning point for the RIVO who receives this evening, "a wave of love" on the part of visitors sympathetic to the cause of refugees. One of them is called Marie-Brodeur Gélinas; it has announced that it will provide the profits of the sales of its macarons " welcome the refugees " the RIVO. 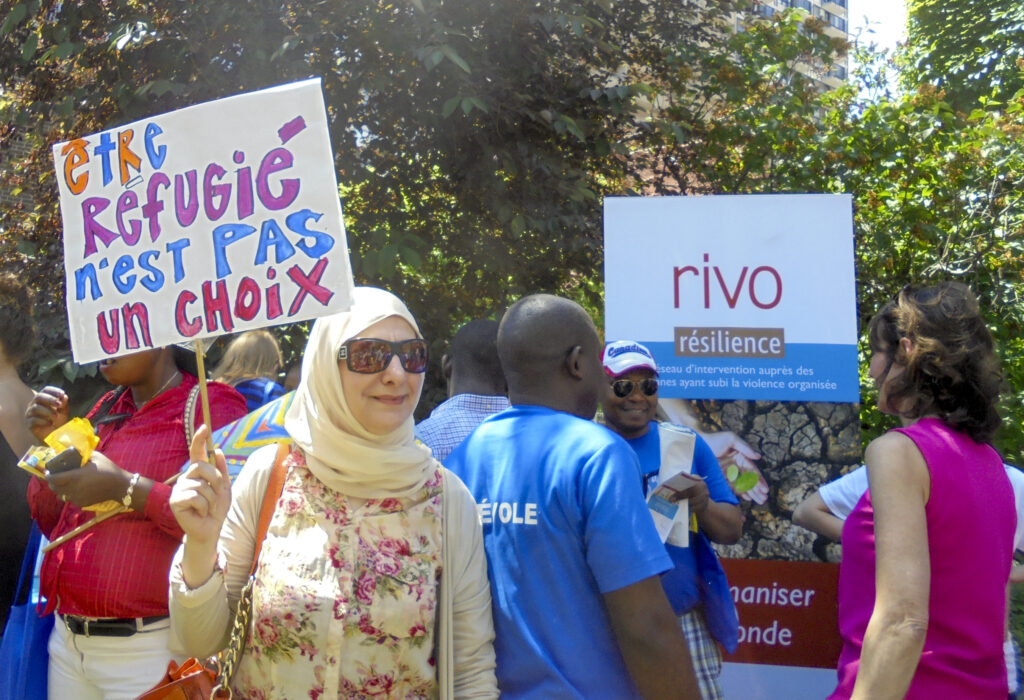 Throughout the year 2016, in order to raise public awareness on the importance of psychological support for the vulnerable refugees and to celebrate the resilience of the survivors, RIVO publishes a series of testimonies of survivors and that of a psychologist :

A survivor of incest and rape of India, now a supervisor in a company in Montréal, is a testament of the support it has received in the RIVO

At the Salon du livre de Montréal 2016, Véronique Harvey, T. s. and psychotherapist and a member of the RIVO, meets Cornelius at the launch of his account of his life telling me how he has managed to rebuild after having survived the rwandan genocide.

March 2017, always looking to improve the quality of its services and its interventions, 18 clinicians RIVO have followed a training in narrative approach given by Andre Gregory, a psychologist.

In support of refugees to facilitate their integration

The growing number of refugees around the world is now estimated to be 22.5 million (United Nations), imposing a serious reflection on their ability to reintegrate in their country of adoption. Refugees and asylum-seekers must first rebuild itself as a person, regain confidence in themselves and in the other, before they can integrate. At the present time, our health system cannot meet the specific needs of these victims. This is why the RIVO plays a crucial role, because in addition to intervene directly with victims, the organization provides training and support to stakeholders of all backgrounds .

After 25 years of sustained effort, the RIVO remains one of the few organizations to offer this pioneering service in Quebec, while the demand continues to grow. It is one of the many reasons that give us the certainty that the RIVO is essential and it is here to stay.

A tribute to a great founder

RIVO would never have existed without its co-founder and co-ordinator, John Docherty, often referred to as the " heart of the RIVO. "Such a great browser crossing, John was able to put the body on the foot, through the storms, and lead up to today RIVO on a route that is stable and secure. It is also the origin of the reputation of the organization that is often referred to integrity.

To learn more about this great man, seeinterview with John Docherty.

A big thank you!

We would like to take this opportunity to thank the therapists involved, the professional volunteers who give their time and share their knowledge of the organizations and staff, our generous donors, including more modest personal gifts to our generous anonymous donor. We would also like to thank the Foundation of the Family George Hogg for her continuous support, both moral and financial. Finally we wish to acknowledge the survivors, those that are considered " vulnerable ", but that are oh-so-courageous and inspiring. Thank you all from the bottom of my heart! 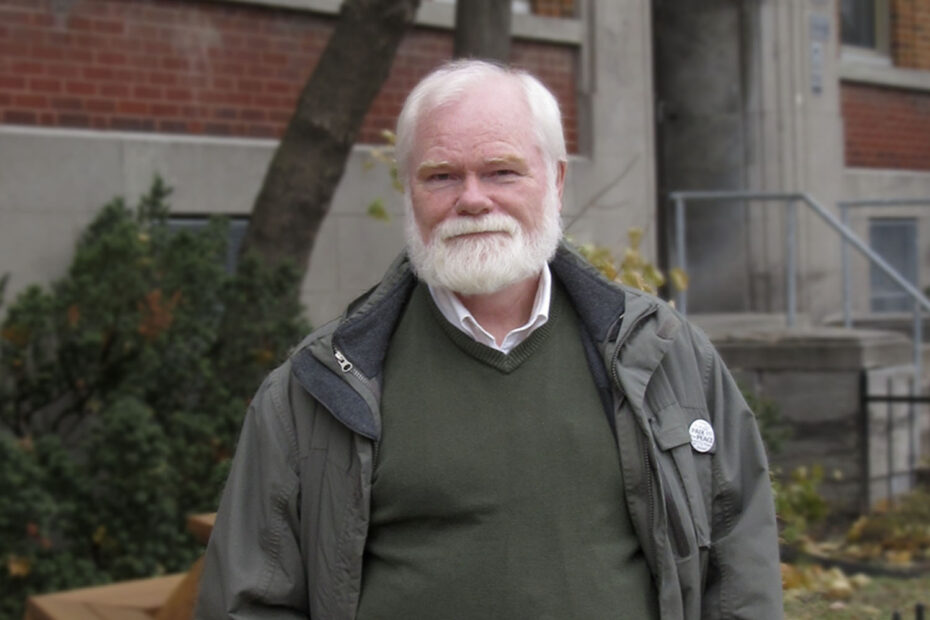